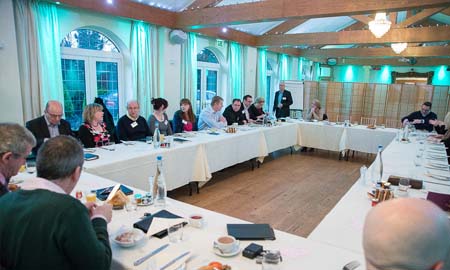 In fairness, whilst I knew a fair bit about climate change, it hadn’t occurred to me to do anything about it - I guess not dissimilar to most. Apathy driven waiting for someone else to do something, like the government, or considering it a bigger business problem!

So, armed with having watched a recent documentary on the subject by the well-respected Sir David Attenborough, I then met up with John, the founder of Beyond Carbon Neutral, who shared his vision with me.

One of the perceived hurdles in my head when considering offsetting my carbon footprint, especially being a small business owner, was “what it is going to cost me?”. Reassured by John that it would be affordable, I went on to one of the numerous carbon footprint calculators online - https://www.carbonfootprint.com/small_business_calculator.html - and entered my energy usage, car mileage and public transport usage and the job was pretty much done.

The calculator came back with the tonnage of carbon that was being generated by the above factors, which sounded quite a lot! With anticipation, I clicked the “Offset now” button and managed to stay seated in my chair - it was only going to cost me £4.10 per month. A bargain!

Relieved by that number, I then thought that maybe I could do more and at that point, in discussion with John, the game was on to see if I could offset the usage of my networking events: the energy usage at the venue (primarily the preparation of the food) and the return journey of the attendees.

A quick survey of members gave me some real numbers on mileage, type of fuel used and engine size; which meant I could use the same calculator, crunch the numbers and get a tonnage figure for the travel.

The biggest challenge was working out the energy usage for cooking a full English. I won’t bore you with all the details here.  However, I am pretty aware of the wattage for kitchen ovens, conveyer belt toasters and water urns; plus, the cooking times of all the constituent parts of this breakfast meal, which enabled me to have the best stab at working out the carbon footprint.

Once the numbers were crunched, it works out less than £1 per meeting to cover not just my business but also the meetings. It is my hope that most of my networking community consider going through this exercise, as I think it can only be a benefit, not just to the planet, but also another string to distinguishing yourself from the competition.

For me, looking at the bigger picture, with the combined annual turnover of SMEs being £2.0 trillion, representing 52% of all private sector turnover (source FSB), if a movement could be started to get 5.6 million SMEs to consider making an impact on their carbon footprint, it does start to make a significant difference as more and more take action to safeguard the planet for future generations!

I am proud to be the first carbon neutral networking group. So, what are you what for? Give the calculator a go and spend a few quid to offset your carbon footprint and start to make a difference to global warming.