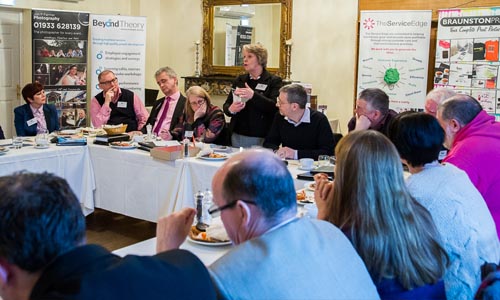 NNConnect, already one of our founder businesses in going carbon Neutral has decided to ramp it up by becoming the UK’s first Carbon Neutral networking organisation.

It’s a great boost for us at this early stage of Beyond Carbon Neutral to see one of our own really take the bull by the horns.  Paul Green (see the clue was in the name) has plans afoot to make all his networking meetings carbon neutral.  That’s every breakfast, every lunch and every evening meeting.

The first thing has of course been to try to work out the best way to judge the meetings’ carbon footprints.   Paul and I discussed this and the best way seems to take an average of the meetings carbon costs as we see them, multiply that by the amount of meetings, add an extra bit of tonnage to make sure the average is in credit rather than debit and then work out the financial costs to offset for one year.

So, what are the carbon costs of the meetings?

As NN Connect the company is already Carbon Neutral, the estimations to use were specifically for the meetings.  Specifically, we needed:

To that end, Paul set up an online survey to find out as much data from his members as possible.  At the time of writing the data is coming in thick and fast and analysis will take place over the next couple of weeks.

So, once we have the cost, how do we pay for it?

Recognising that NN Connect meetings are correctly priced for the market, I agreed with Paul that a blanket hike in the cost of a meeting would be both draconian and potentially damaging to meeting numbers.  That was the last thing we wanted.  So, the decision has been made to make the total that we need to reach each year’s carbon offset become a group effort to raise the funds through donation.  NN Connect is considering a few charity options to use to deal with the carbon offsetting.  Once that’s done, you can bet that Beyond carbon Neutral will update you as to how it’s progressing.